Do you want to debug? - annoying dialog

ENQUIRER:
Dear, Dorset Software Consultant,
On my laptop (only,not my PC) I am getting a lot of annoying dialog boxes that pop up and say there is a runtime error and do I want to debug. ["Do you want to debug?"] If I say yes, the script editor from Microsoft pops up, but I don't know what I am doing with it so I always wind up closing it. How do I get these things to leave me alone?

Dear Enquirer,
Am I right in thinking that these dialogs only appear when you are using browser software?

If so then it is probably an easy thing to fix.

Open up internet explorer options and check the select boxes shown in the graphic below.

That should fix it. 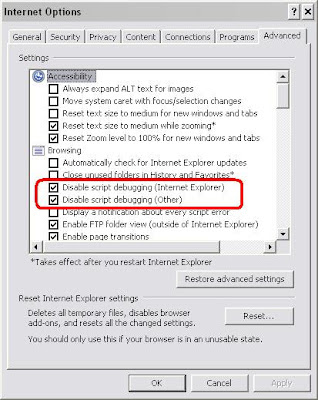 If this is occuring not just in your browser software we may have to think along some other lines... like you may have some sort of mild virus.

Three likely scenarios occur to me:
(1) Virus:
Do you have virus software installed?

(3) You have some disk or memory corruption:
When was the last time you checked your disks for errors?
Are you running out of space on any of your disk drives?
Did you recently have a power failure that rebooted your PC without shutting down properly?
Or someone shut it down using the wall power switch instead of windows “Shut down” procedure?

ENQUIRER:
I think I am getting clearer about when this happens. I think it is related to the fact that I just close my laptop when it is plugged in, don't shut down, and then unplug the laptop from the wall later, either use it on battery, or plug it in somewhere else and use it on AC. I have been wondering for awhile: When I go to shut down in Microsoft, when should I select Standby, when should I select Hibernate (I think this has to do with not running down the battery, so I'm guessing you'll say that), or Turn off (or Restart) completely?

I want to know which I should choose of the first three when I am unplugging from the wall and moving the laptop somewhere else.

"Standby" and "Hibernate" are both designed to be ways of conserving power (usually of a laptop) whilst being able to stop and resume working from whatever point you have got to. For example you don't have to close and save files (at least theoretically) you can just stop, and pickup from whereever you had got to.

The difference between Standby and Hibernate is that Hibernate copies your computer memory (including any open files) onto your hard drive, whereas Standby leaves the power going to the memory and the contents of the memory as it is.

Consequently you should expect Hibernate to take a bit longer (both going into hibernation and coming out of it). On the other hand, Hibernate should conserve more battery life, because it is not having to keep power going to the laptop memory. If the laptop is going on a longer journey, it is probably better to use hibernate, because keeping power going to the computer memory may ultimately drain the batteries to such an extent that machine gives up and powers down, potentially losing any work that you haven't saved.

See difference between "Standby" and "Hibernate"

I think somewhere I have seen a piece of software that automatically moves your computer from Standby to Hibernate when battery reserves are getting low, although I don't remember for sure. In any case I personally wouldn't count on it.

Personally, I would be inclined to always save copies of my work. If I want to avoid overwriting an existing file that I'm not sure I want to replace yet, I would simply make a new copy and keep the old until I'm happy that the new one can replace it.

Also with regard to Hibernate, I would bear in mind that if your disk drives are old, or well used, or nearly full up, or very fragmented, or have shown any signs of being liable to errors or corruption, your hibernate file is going to be susceptible to corruption during the process of putting on to the hard drive and/or restoring it off again. The outcome of restoring a corrupt hibernate file is probably not predictable.
Posted by Andrew at 18:00